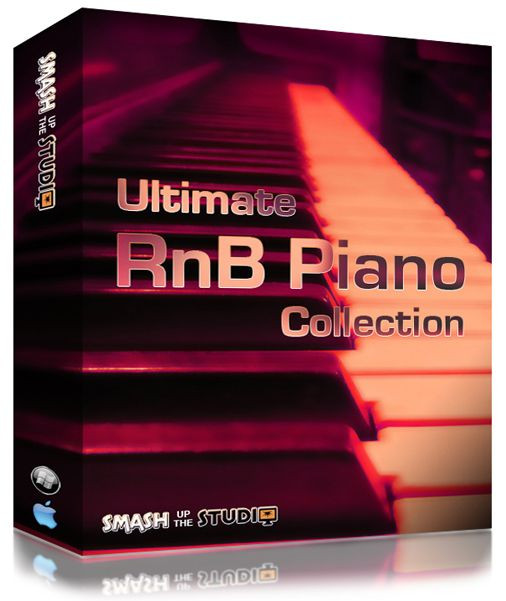 These fantastic chord progressions will give your tracks a higher level of quality and sophistication.Perfect for producers of soulful RnB, modern RnB, HipHop and Pop.

Stunning RnB piano phrases, beautifully played with soul and feeling by a top session keyboardist.
These fantastic chord progressions will give your tracks a higher level of quality and sophistication.
Perfect for producers of soulful RnB, modern RnB, HipHop and Pop.

Smash Up The Studio gives you an opportunity to own this special edition consisting of their 3 most
popular RnB piano packs at an amazing knockdown price. (normal price £60)

A brand new selection of superior quality piano loops. Inspirational and highly contemporary, this pack is designed for producers of modern R&B, Hip Hop and Pop, and focuses on the very latest styles heard on R&B hits today.

Beautiful piano loops, played to perfection.... A superb selection of Midi piano loops in the style of
RnB and Soul. These fantastic chords will give your tracks a higher level of quality and sophistication.

This special edition collection also features all the original MIDI performances, untouched and un-quantised, straight from the artists fingertips for maximum soul and real feel. However, for those producers who prefer their keyboard loops rock solid and locked in with the beat we have also included quantised Midi loops for the more contemporary feel of modern RnB and Pop. Quantised Midi files have been programmed using a Logic A groove, which is the equivalent of a standard straight 16. Those producers who really like to swing their drum grooves can adjust the swing factor of each individual midi loop to fit the groove of the beat within their DAW. This is just one example of the flexibility of Midi loops, which when combined with a high standard of performance make this collectionstand out head and shoulders above other RnB piano sample packs.

"Urban Piano" and "RnB Vibes: Piano" also come in 24 Bit Wav and Apple Loop formats as well as Midi and also with some of the other keyboard sounds and bonus beats heard in the "RnB Vibes" demo.

Loops range between 2 and 16 bars with the majority at 4 bars. Each loop is tempo labelled, and all loops are royalty free.

Composed and performed by Steve Burton exclusively for Smash Up The Studio.

Steve Burton is a session keyboardist, songwriter, producer based in London. He has worked in R&B, House, Pop and Jazz thru to Film and Soundtrack, and has featured on many great mixes by artists such as: